Was the founder of the Japanese Soto school, which he introduced to Japan following his studies in China with Tendo Nyojo at Qìngdé monastery on Tiāntóng Mountain. Dogen emphasized the importance of zazen above all else, advocating shikantaza – which roughly translates as “just sitting.” In Dogen’s view, shikantaza is not a means to enlightenment, but enlightenment itself. He believed that the practice of shikantaza is the natural expression of our true nature, and he is remembered as one of Japan’s greatest religious thinkers. 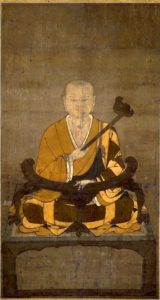