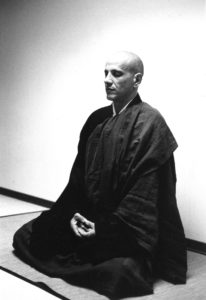 The eighty-fourth generation Dharma-descendent of Shakyamuni Buddha in the lineage of Dogen, the second European and the first Hungarian patriarch.

Mokusho Zeisler István was born in 1946, in Budapest, Hungary. He was three years old, when he moved to France with his parents. He grew up in Paris, where he studied law. In 1967 he met master Deshimaru, soon after his arrival to France. He was among the firsts who started practicing with him and he soon became his translator. He was one of the most remarkable figure of Deshimaru’s sangha; one of Deshimaru’s two main disciples.

In 1984, he received Dharma-transmission from Renpo Niwa Zenji, the abbot of Eiheiji along with Kosen Thibaut and Yuno Rech. From the death of the patriarch in 1982, until 1990, his charismatic personality, extraordinary energy and deep vision ensured the unity of the Deshimaru sangha.

In 1990 he returned to Budapest to scatter the ashes of his father in the Danube, who has passed away two months earlier. He drove back from Budapest to Paris, where he passed away thirteen days later on the 8th of June, 1990.

He wanted to return to his native country, to establish a dojo; a place to practice the Way, to bring the kesa; Buddha’s robe and the practice of zazen. His early death didn’t allow him to realize his plan, but he sent his first desciple, monk Myoken (Yvon Bec) to realize his vow. Myoken founded several temples in Hungary and Romania, as well as in neigboring countries and the Zeisler Foundation and the Mokusho Zen House, wearing the name of its spiritual founder.

The purest practice in zen is called zazen, shikantaza, just sitting. It is also known as mokusho zen or silent illumination zen. Mokusho zen is considered as the highest, without any goal to achieve. Its wisdom cannot be fathomed. No categories can reach it. This is the name, that master Deshimaru gave to Etienne Zeisler, when he ordained him: Senku Mokusho, the Sage of Emptiness, Silent Illumination.

A ten day sesshin is held every June in the Hoboji zen temple in memory of master Zeisler: this is the Mokusho-sesshin. On the anniversary of his death, during the night of 7th till the 8th of June, traditionally a zazen night takes place, where we chant master Wanshi’s poem of Mokushoka, The song of silent illumination. 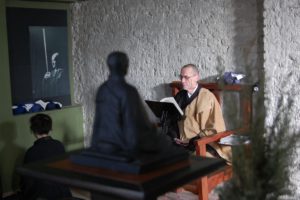 Master Myoken was born in 1949, in France, where he studied law and philosophy (as a student of Robert Misrahi) at the Sorbonne university. Monk Myoken has been following the teaching of master Taisen Deshimaru and master Mokusho Zeisler from 1974. He is teaching in Hungary and in Easter-Europe since 1992. He has strong connection to Hungary and to the Hungarian culture: he had two Hungarian piano teachers: György Cziffra and György Solchany.

He founded the temple Taisenji in Budapest, named after master Deshimaru’s bodhisattva-name, and the Hoboji – the Temple of the Treasure of the Dharma – the first zen temple in Eastern-Europe, in Pilisszentlaszlo. He is also the founder of the Mokusho Zen Dojos in Bucharest and Zagreb. Monk Myoken received the formal Dharma-transmission (Shiho) from master Kosen Thibaut, Renpo Niwa zenji’s Dharma-heir in the autumn of 2002. Master Myoken is in close touch with several spiritual leaders of Europe, like Zentatsu Baker roshi, Suzuki roshi’s dharma-heir, Fausto Taiten Guareschi, the abbot of Fudenji zen temple in Italy, master Stephane Kosen Thibaut and master Barbara Kosen, master Deshimaru’s greatest living disciples, Lama Denys, Kalu rinpoche’s successor in Europe and Genpo roshi, leader of the international Kanzeon Sangha. He is a member of the worldwide organisation, COVR (Colloquium on violence and religion), registered by Rene Girard.